SES was tasked with dredging sediment out of the Eastern County Ditch in Revere, MA to allow for better tidal flow in the marsh areas, improve the aquatic habitat/ ecosystem, and help mitigate flooding in the local city neighborhoods. This required SES to remove approx 1000 CY of built-up sediment from the ditch to allow for proper flow of the tides.

SES worked with a vast team of engineers, consultants, and local officials to complete the work. Hancock Engineers designed the dredging plan, Weston and Sampson Engineers provided LSP oversight and monitoring as well as permitting help, and the City of Revere Department of Sewers provided in field guidance for the uncovering of buried drain lines.

This project also required SES to stay in strict compliance with several permits and access agreements. The two driving regulatory agencies for this work was the MassDEP and the Army Corps of Engineers. These two agencies specified the flow of work order, maximum sediment removals, dig times in accordance with the times, machinery requirements, and a plethora of other requirements. Additionally, given that SES was working on NGRID and DCR property, controls had to be put in place to prevent disruptive damage. This included placing steel plates over buried electric lines at crossing points and limiting equipment crossing the lines to below HS25 loading specifications. Also, an access road was built for DCR to avoid damage to an existing ballfield and to give local beachgoers a safe place to walk through the site and to the beach.

After site mobilization and sufficient land clearing, SES commenced the removal work with the Revere Street culvert cleaning. Miniature tracked skid steer machines (dingos) were necessary due to an additional 100 CY of material build-up in the culvert from the time the initial surveys were done. This was a common theme throughout the project. SES removed the sediment from the culvert so that it could be managed by a larger excavator and properly stockpiled. All material removed from the culvert was placed in temporary dewatering cells, underlain with geotextile fabric, which involved using haybales and silt fence on three sides to encourage water to run back into the ditch.

Upon culvert cleaning completion, SES began working through the cells working south to north. Aqua Barriers were used to dam off the cell to the surrounding water. Aqua Barriers are bladder bags that can be filled with water from the area to create a tight seal on the area and prevent water from entering a work zone. From there, 4-inch pumps were used to dewater the area so that we were digging in the driest conditions possible. Also, a 4-inch pump was used as a tidal bypass around the work zone so that the natural flow of water in and out of the ditch was not interrupted.

After all material was removed, according to the plans and redesigns for the additional sediment, it was allowed to dry and prepared for final disposal at in-state landfills. The sediment was removed from site and the work areas were restored by grading out track marks, removing temporary controls, and spreading a seed mixture specified by DEP for tidal habitats.

The project was a success and took extensive coordination between all groups to remove the additional sediment encountered with a fixed budget as well as to still achieve optimal flow. Over 1000 CY were removed from the ditch as well as unquantifiable amounts of trash, debris, and invasive phragmites. Throughout the progress of work, fish were seen using the ditch for shelter, water fowl was using the area as birthing grounds, and the city reported an exponential decrease in flooding in select neighborhoods. 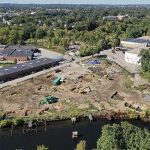 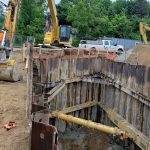