SES was contracted by FOCO Inc. for the excavation, transportation and disposal of an estimated 4,000 tons of Petroleum Contaminated Soils at the Concord, NH Location. As part of the project, SES was tasked with design and installation of a shoring system that allowed us to excavate the soils to a depth of 30’ below ground surface. This was very challenging as the excavation location was within 15’ of a state highway. In addition, the water table was at an estimated 20’ below ground surface requiring pumping and offsite disposal of gasoline contaminated water.

In order to achieve the necessary depth SES utilized a variety of heavy equipment including a mini excavator placed in the excavation, as well as a 60’ long stick excavator. SES also lowered an 8-ton vibratory compactor into the excavation pit that allowed SES to achieve 95% + compaction to grade.

SES was also able to remove additional soil closer to the road utilizing a slide rail trenching system. This was necessary due to overhead power lines.

Total volume of petroleum contaminated soil removed and transported off site was just over 6,000 tons.

Project was completed safely and on schedule. 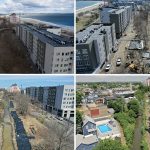 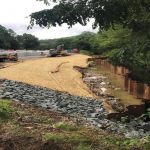